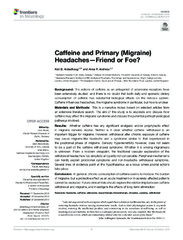 Background: The actions of caffeine as an antagonist of adenosine receptors have been extensively studied, and there is no doubt that both daily and sporadic dietary consumption of caffeine has substantial biological effects on the nervous system. Caffeine influences headaches, the migraine syndrome in particular, but how is unclear.

Materials and Methods: This is a narrative review based on selected articles from an extensive literature search. The aim of this study is to elucidate and discuss how caffeine may affect the migraine syndrome and discuss the potential pathophysiological pathways involved.

Results: Whether caffeine has any significant analgesic and/or prophylactic effect in migraine remains elusive. Neither is it clear whether caffeine withdrawal is an important trigger for migraine. However, withdrawal after chronic exposure of caffeine may cause migraine-like headache and a syndrome similar to that experienced in the prodromal phase of migraine. Sensory hypersensitivity however, does not seem to be a part of the caffeine withdrawal syndrome. Whether it is among migraineurs is unknown. From a modern viewpoint, the traditional vascular explanation of the withdrawal headache is too simplistic and partly not conceivable. Peripheral mechanisms can hardly explain prodromal symptoms and non-headache withdrawal symptoms. Several lines of evidence point at the hypothalamus as a locus where pivotal actions take place.

Conclusion: In general, chronic consumption of caffeine seems to increase the burden of migraine, but a protective effect as an acute treatment or in severely affected patients cannot be excluded. Future clinical trials should explore the relationship between caffeine withdrawal and migraine, and investigate the effects of long-term elimination.