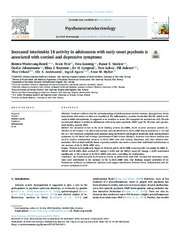 Objective - Evidence indicates that the pathophysiology of adult psychosis involves immune dysregulation, but its associations with stress are often not considered. The inflammatory cytokine interleukin (IL)-18, which is elevated in adult schizophrenia, is suggested to be sensitive to stress. We compared the associations of IL-18 with cortisol and clinical variables in adolescents with early-onset psychosis (EOP) aged 12–18 years and age-matched healthy controls (HC).