Longitudinal changes in body composition and waist circumference by self-reported levels of physical activity in leisure among adolescents: the Tromsø Study, Fit Futures 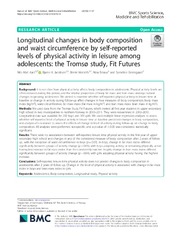 Methods - We used data from the Tromsø Study Fit Futures, which invited all first year students in upper secondary high school in two municipalities in northern Norway in 2010–2011. They were reexamined in 2012–2013. Longitudinal data was available for 292 boys and 354 girls. We used multiple linear regression analyses to assess whether self-reported level of physical activity in leisure time at baseline predicted changes in body composition, and analysis of covariance to assess the effects of change in level of activity during follow-up on change in body composition. All analyses were performed sex-specific, and a p-value of < 0.05 was considered statistically significant.