Consumption of meat, fish, dairy products, and eggs and risk of ischemic heart disease: A prospective study of 7198 incident cases among 409 885 participants in the Pan-European EPIC Cohort 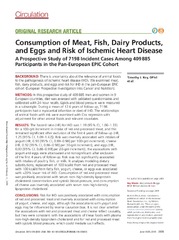 Background - There is uncertainty about the relevance of animal foods to the pathogenesis of ischemic heart disease (IHD). We examined meat, fish, dairy products, and eggs and risk for IHD in the pan-European EPIC cohort (European Prospective Investigation Into Cancer and Nutrition).

Methods - In this prospective study of 409 885 men and women in 9 European countries, diet was assessed with validated questionnaires and calibrated with 24-hour recalls. Lipids and blood pressure were measured in a subsample. During a mean of 12.6 years of follow-up, 7198 participants had a myocardial infarction or died of IHD. The relationships of animal foods with risk were examined with Cox regression with adjustment for other animal foods and relevant covariates.