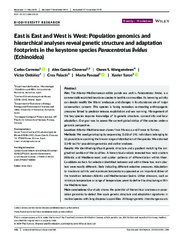 Aim - The Atlanto‐Mediterranean edible purple sea urchin, Paracentrotus lividus, is a commercially exploited keystone species in benthic communities. Its browsing activity can deeply modify the littoral landscape, and changes in its abundance are of major conservation concern. This species is facing nowadays contrasting anthropogenic pressures linked to predator release, exploitation and sea warming. Management of this key species requires knowledge of its genetic structure, connectivity and local adaptation. Our goal was to assess the current global status of the species under a genomic perspective.

Location - Atlanto‐Mediterranean shores from Morocco and France to Turkey.

Methods - We used genotyping by sequencing (GBS) of 241 individuals belonging to 11 populations spanning the known range of distribution of the species. We obtained 3,348 loci for population genomics and outlier analyses.

Results - We identified significant genetic structure and a gradient matching the longitudinal position of the localities. A hierarchical analysis revealed two main clusters (Atlantic and Mediterranean) and subtler patterns of differentiation within them. Candidate markers for selection identified between and within these two main clusters were mostly different, likely indicating different selective pressures. Adaptation to maximum salinity and maximum temperature appeared as an important driver of the transition between Atlantic and Mediterranean basins. Other stressors, such as minimum temperature or range of temperature, seem to define the structuring within the Mediterranean.

Main conclusions - Our study shows the potential of hierarchical analyses on population genomics to detect fine‐scale genetic structure and adaptation signatures in marine species with long dispersal capabilities. Although genetic interchange occurs widely in Paracentrotus lividus, the species is sensitive to dispersal barriers, displays isolation by distance and faces local selective pressures associated to environmental conditions, all of which can render it more vulnerable than previously thought.