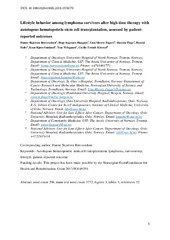 Introduction: High-dose therapy with autologous stem cell transplantation (HD-ASCT) is associated with an increased risk of late effects. Our aim was to assess lifestyle behavior and factors associated with unhealthy lifestyle among HD-ASCT-treated lymphoma survivors (HD-ASCT-LS).

Materials and methods: We conducted a national cross-sectional study of HD-ASCT-LS treated during 1987–2008. Among 399 eligible participants, 312 (78%) completed patient-reported outcome measures (PROMs) on lifestyle behavior (physical activity, overweight, smoking and alcohol consumption), chronic fatigue (CF) and somatic and mental illness. We assessed lifestyle according to WHO recommendations. Multivariable logistic regression models were used to study associations between variables. A comparison to the general population was performed.

Discussion: Assessed by PROMs, unhealthy habits were frequent among HD-ASCT-LS and associated with comorbidity. Nevertheless, compared with controls significantly more HD-ASCT-LS met lifestyle recommendations. These results indicate that the HD-ASCT-LS may consist of two groups, the adhering group with less comorbidity and the non-adhering group with more comorbidity. Our findings illustrate the necessity of recommendations and support for improving health-related behavior in cancer survivorship plans in order to empower survivors in their life beyond cancer.