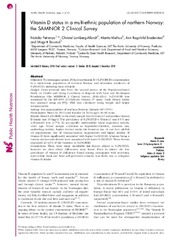 Objective - To investigate serum 25-hydroxyvitamin D (S-25(OH)D) concentration in a multi-ethnic population of northern Norway and determine predictors of S-25(OH)D, including Sami ethnicity.

Design - Cross-sectional data from the second survey of the Population-based Study on Health and Living Conditions in Regions with Sami and Norwegian Populations (the SAMINOR 2 Clinical Survey, 2012–2014). S-25(OH)D was measured by the IDS-iSYS 25-Hydroxy Vitamin Dˢ assay. Daily dietary intake was assessed using an FFQ. BMI was calculated using weight and height measurements.

Results - Mean S-25(OH)D in the study sample was 64·0 nmol/l and median vitamin D intake was 10·3 µg/d. The prevalence of S-25(OH)D<30 nmol/l was 1·9 % and <50 nmol/l was 24·7 %. In sex-specific multivariable linear regression models, older age, blood sample collection in September–October, solarium use, sunbathing holiday, higher alcohol intake (in females), use of cod-liver oil/fish oil supplements, use of vitamin/mineral supplements and higher intakes of vitamin D were significantly associated with higher S-25(OH)D, whereas being a current smoker and obesity were associated with lower S-25(OH)D. These factors explained 21–23 % of the variation in S-25(OH)D.

Conclusions - There were many modifiable risk factors related to S-25(OH)D, however no clear ethnic differences were found. Even in winter, the low prevalence of vitamin D deficiency found among participants with non-Sami, multi-ethnic Sami and Sami self-perceived ethnicity was likely due to adequate vitamin D intake.