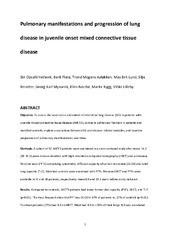 Methods - A cohort of 52 patients with JMCTD were examined in a cross-sectional study after a mean 16.2 (SD 10.3) years of disease duration with high-resolution computed tomography (HRCT) and pulmonary function tests (PFT) comprising spirometry, DLCO, and total lung capacity (TLC). Matched controls were examined with PFT. Previous HRCT and PFT were available in 37 and 38 patients (mean 8.8 and 10.3 yrs before study inclusion), respectively.

Results - Compared to controls, patients with JMCTD had lower forced vital capacity (FVC), DLCO, and TLC (p < 0.01). The most frequent abnormal PFT was DLCO in 67% of patients versus 17% of controls (p < 0.001). Fourteen patients (27%) had ILD on HRCT. Most had ILD in < 10% of their lungs. ILD was associated with low values for FVC and TLC, but not with DLCO. HRCT findings did not progress significantly over time, but FVC declined (p < 0.01).

Conclusion - Compared to controls, patients with JMCTD had impaired pulmonary function. ILD was present in 27% of patients after a mean 16 years of disease duration, mostly as mild disease, and did not progress. ILD seems to be less common in juvenile-onset than in adult-onset MCTD, and ILD in JMCTD seems mostly mild and stable over time.

This is a pre-copyediting, author-produced PDF of an article accepted for publication in The Journal of Rheumatology following peer review. The definitive publisher-authenticated version Hetlevik, S.O., Flatø, B., Aaløkken, T.M., Lund, M.B., Reiseter, S., Mynarek, G.K. ... Lilleby, V. (2019). Pulmonary Manifestations and Progression of Lung Disease in Juvenile-onset Mixed Connective Tissue Disease. The Journal of Rheumatology, 46(1), 93-100, is available online at: https://doi.org/10.3899/jrheum.180019.