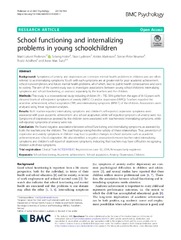 Background - Symptoms of anxiety and depression are common mental health problems in children and are often referred to as internalizing symptoms. Youth with such symptoms are at greater risk for poor academic achievement, school non-completion, and future mental health problems, all of which, lead to public health consequences and costs to society. The aim of the current study was to investigate associations between young school children’s internalizing symptoms and school functioning, as assessed separately by the teachers and the children.

Methods - This study is a cross-sectional study including children (N = 750. 58% girls) from the ages of 8–12 years with elevated levels of self-reported symptoms of anxiety (MASC-C) and/or depression (SMFQ). Teachers reported the academic achievement, school adaptation (TRF) and internalizing symptoms (BPM-T) of the children. Associations were analyzed using linear regression analyses.

Conclusion - We found negative associations between school functioning and internalizing symptoms, as assessed by both the teachers and the children. The dual findings strengthen the validity of these relationships. Thus, prevention of depressive and anxiety symptoms in children may lead to positive changes in school domains such as academic achievement and school adaptation. We also identified a negative association between teacher-rated internalizing symptoms and children’s self-report of depressive symptoms, indicating that teachers may have difficulties recognizing children with these symptoms.