The influences of morphine or ketamine pre-treatment on hemodynamic, acid-base status, biochemical markers of brain damage and early survival in rats after asphyxial cardiac arrest 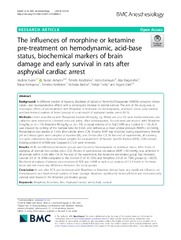 Background - In different models of hypoxia, blockade of opioid or N-methyl-D-aspartate (NMDA) receptors shows cardio- and neuroprotective effects with a consequent increase in animal survival. The aim of the study was to investigate effects of pre-treatment with Morphine or Ketamine on hemodynamic, acid-base status, early survival, and biochemical markers of brain damage in a rat model of asphyxial cardiac arrest (ACA).

Methods - Under anaesthesia with Thiopental Sodium 60 mg/kg, i.p., Wistar rats (n = 42) were tracheostomized and catheters were inserted in a femoral vein and artery. After randomization, the rats were pre-treated with: Morphine 5 mg/kg i.v. (n = 14); Ketamine 40 mg/kg i.v. (n = 14); or equal volume of i.v. NaCl 0.9% as a Control (n = 14). ACA was induced by corking of the tracheal tube for 8 min, and defined as a mean arterial pressure (MAP) < 20 mmHg. Resuscitation was started at 5 min after cardiac arrest (CA). Invasive MAP was recorded during experiments. Arterial pH and blood gases were sampled at baseline (BL) and 10 min after CA. At the end of experiments, all surviving rats were euthanised, brain and blood samples for measurement of Neuron Specific Enolase (NSE), s100 calcium binding protein B (s100B) and Caspase-3 (CS-3) were retrieved.

Results - At BL no differences between groups were found in hemodynamic or acid-base status. After 3 min of asphyxia, all animals had cardiac arrest (CA). Return of spontaneous circulation (MAP > 60 mmHg) was achieved in all animals within 3 min after CA. At the end of the experiment, the Ketamine pre-treated group had increased survival (13 of 14; 93%) compared to the Control (7 of 14; 50%) and Morphine (10 of 14; 72%) groups (p = 0.035). Biochemical analysis of plasma concentration of NSE and s100B as well as an analysis of CS-3 levels in the brain tissue did not reveal any differences between the study groups.

Conclusion - In rats after ACA, pre-treatment with Morphine or Ketamine did not have any significant influence on hemodynamic and biochemical markers of brain damage. However, significantly better pH level and increased early survival were found in the Ketamine pre-treated group.