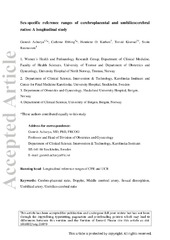 Objectives - The ratio of middle cerebral artery (MCA) pulsatility index (PI) to umbilical artery (UA) PI, i.e. cerebro‐placental ratio (CPR), has been suggested as a measure of fetal “brain sparing” phenomenon reflecting redistribution of fetal cardiac output as a response to placental insufficiency. Observational studies have shown that low CPR values predict increased risk of adverse perinatal outcomes although evidence from randomized clinical trials is lacking. The inverse ratio, i.e. umbilico‐cerebral ratio (UCR), is preferred by some as it increases with increasing degree of fetal compromise. Monitoring fetal wellbeing requires serial assessment, and for this purpose, appropriate reference values should be based on data from longitudinal studies. However, longitudinal reference ranges for the UCR have not been established. Furthermore, the sex of the fetus influences its growth velocity, cord properties, in utero circadian rhythm, behavioral states and placental function, but whether gestational age‐dependent changes in CPR or UCR differ between male and female fetuses has not been studied.

Thus, our objective was to investigate sex‐specific, gestational age‐associated serial changes in CPR and UCR during the second half of pregnancy and establish longitudinal reference ranges.

Methods - This was a dual‐center prospective longitudinal study of singleton low risk pregnancies. Doppler blood flow velocity waveforms were obtained serially from the UA and MCA during 19‐41 weeks of gestation, and PIs were determined. CPR and UCR were calculated as the ratios, MCA PI/ UA PI and UA PI/ MCA PI, respectively. The course and outcome of pregnancies was recorded. Sex of the fetus was determined after delivery. Reference intervals were constructed using multilevel modelling and gestational age‐specific Z‐scores of male and female fetuses were compared.

Results - Of a total of 299 pregnancies enrolled, 284 women and their fetuses (148 male and 136 female) were included in the final analysis, and 979 paired measurements of UA and MCA PIs were used to construct sex‐specific longitudinal reference intervals. Both CPR and UCR had U‐shaped curves of development during pregnancy, but with opposite directions. There was a small but significant (P=0.007) difference in z‐scores of CPR and UCR between male and female fetuses throughout the second half of pregnancy.

Conclusions - We have established longitudinal reference ranges for CPR and UCR suitable for serial monitoring with possibilities to refine the assessment by fetal sex‐specific ranges and the conditioning by a previous measurement. The clinical significance of such refinements needs further evaluation.

This is the peer reviewed version of the following article: Acharya, G., Ebbing, C., Karlsen, H., Kiserud, T. & Rasmussen, S. (2019). Sex-specific reference ranges of cerebroplacental and umbilicocerebral ratios: A longitudinal study. Ultrasound in Obstetrics and Gynecology, 2019, which has been published in final form at https://doi.org/10.1002/uog.21870. This article may be used for non-commercial purposes in accordance with Wiley Terms and Conditions for Use of Self-Archived Versions.