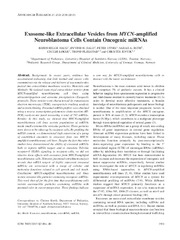 Background: In recent years, evidence has accumulated indicating that both normal and cancer cells communicate via the release and delivery of macromolecules packed into extracellular membrane vesicles.

Results: In this study, we showed that MYCN-amplified neuroblastoma cell lines secrete populations of miRNAs inside small exosome-like vesicular particles. These particles were shown to be taken-up by recipient cells. By profiling the miRNA content, we demonstrated high expression of a group of established oncomirs in exosomes from two MYCN-amplified neuroblastoma cell lines. Despite the fact that other studies have demonstrated the ability of exosomal miRNAs both to repress mRNA targets and to stimulate Toll-like receptor-8 (TLR8) signaling in recipient cells, we did not observe these effects with exosomes from MYCN-amplified neuroblastoma cells. However, functional enrichment analysis reveals that mRNA targets of highly expressed exosomal miRNAs are associated with a range of cellular and molecular functions related to cell growth and cell death.