Aspects of Lung Cancer by Sex 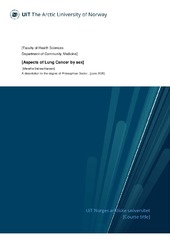 Lung cancer is the most common cancer in men and the third most frequent in women across the globe, and the leading cause of cancer death worldwide. The rising worldwide incidence of lung cancer among women has raised the possibility of a sex difference in the association between smoking and lung cancer. It has been estimated that approximately 90% of all lung cancer is related to smoking. The smoking prevalence among women peaked almost 20 years later than that in men in most countries, and men have consumed more than 70% of the cigarettes smoked in Norway. The aims of this thesis were to study the association between smoking and risk of lung cancer and lung cancer mortality by sex. We also wanted to examine active and passive smoking and risk of lung cancer in a national random sample of Norwegian women and estimate the population attributable fraction (PAF). We utilized a pooled cohort of three studies that included almost 600,000 Norwegian men and women, in Paper 1 and 2. In Paper 3, we used data from the Norwegian Women and Cancer study. When we analyzed measures of smoking exposure in categorical groups, we detected no difference in the risk of lung cancer or lung cancer mortality between men and women. When we analyzed categories of measures of smoking exposures as continuous variables, females had a significantly higher risk of lung cancer (Paper 1) and lung cancer death (Paper 2) than males. In Paper 3, we found that passive smokers had a 1.3-fold, non-significant, increased risk of lung cancer when compared with never smokers. Furthermore, we found that eight in 10 lung cancer cases among women could have been avoided if the women had never smoked.