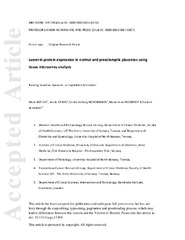 Introduction - Laeverin is a placenta‐specific protein that is normally expressed in the plasma membrane of human trophoblasts. In previous studies, we showed higher expression levels of laeverin gene in preeclamptic compared with normal placentas and found that laeverin protein was ectopically expressed in the cytoplasm of the preeclamptic placentas. Our objective was to investigate laeverin protein expression in normal and preeclamptic placentas combining immunohistochemistry and immunofluorescence.

Material and methods - Tissue microarray analysis of 72 placentas, obtained from 33 preeclamptic and 39 uncomplicated pregnancies, was performed. Laeverin was labeled with a specific antibody for immunohistochemistry and immunofluorescence studies.

Results - Immunohistochemistry showed that laeverin was expressed in syncytiotrophoblasts, cytotrophoblasts and extravillous trophoblasts in all placentas examined. In preeclamptic placentas (n = 33) compared with normal placentas (n = 39), laeverin was expressed in the cell membrane in 21 (64%) vs. 21 (54%) samples (p = 0.726), in the cytoplasm in 3 (9%) vs. 2 (5%) samples (p = 0.795) and in both the cytoplasm and membrane in 9 (27%) vs. 16 (41%) samples (p = 0.0522). All placental samples that showed cytoplasmic expression of laeverin were obtained from women who delivered before 34 weeks of gestation (early‐onset preeclampsia). Further, immunofluorescence studies showed laeverin expression in the cytoplasm of six preeclamptic (three early‐onset and three late‐onset) and one normal placenta but did not reveal any simultaneous cell membrane and cytoplasmic expression of laeverin.

Conclusion - Laeverin is expressed in all trophoblast cell types of normal and preeclamptic placentas. Expression pattern of laeverin in trophoblast cells is heterogeneous and not necessarily membrane‐bound.

This is the peer reviewed version of the following article: Nystad, M., Sitras, V.S., Nordbakken, C., Pedersen, M.I. & Acharya, G. (2018). Laeverin Protein Expression in Normal and Preeclamptic Placentas using Tissue Microarray Analysis. Acta Obstetricia et Gynecologica Scandinavica, 97(5), 536-544, which has been published in final form at https://doi.org/10.1111/aogs.13304. This article may be used for non-commercial purposes in accordance with Wiley Terms and Conditions for Use of Self-Archived Versions.