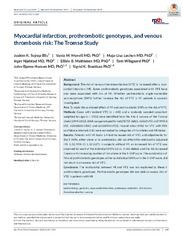 Background - The risk of venous thromboembolism (VTE) is increased after a myocardial infarction (MI). Some prothrombotic genotypes associated with VTE have also been associated with risk of MI. Whether prothrombotic single‐nucleotide polymorphisms (SNPs) further increase the risk of VTE in MI patients is scarcely investigated.

Aim - To study the combined effect of MI and prothrombotic SNPs on the risk of VTE.

Results - Patients with MI had a 1.4‐fold increased risk of VTE, and adjustments for the 5 SNPs, either alone or in combination, did not affect this relationship (adjusted HR, 1.52; 95% CI, 1.12‐2.07). In subjects without MI, an increased risk of VTE was observed for each of the individual SNPs (≥1 vs. 0 risk alleles), and the risk increased linearly with increasing number of risk alleles in the 5‐SNP score. The combination of MI and prothrombotic genotypes, either as individual SNPs or in the 5‐SNP score, did not result in an excess risk of VTE.