Plasma levels of interleukin 27 in falciparum malaria is increased independently of co-infection with HIV: Potential immune-regulatory role during malaria 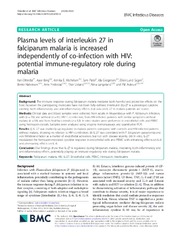 Background - The immune response during falciparum malaria mediates both harmful and protective effects on the host; however the participating molecules have not been fully defined. Interleukin (IL)-27 is a pleiotropic cytokine exerting both inflammatory and anti-inflammatory effects, but data on IL-27 in malaria patients are scarce.

Methods - Clinical data and blood samples were collected from adults in Mozambique with P. falciparum infection, with (n = 70) and without (n = 61) HIV-1 co-infection, from HIV-infected patients with similar symptoms without malaria (n = 58) and from healthy controls (n = 52). In vitro studies were performed in endothelial cells and PBMC using hemozoin crystals. Samples were analyzed using enzyme immunoassays and quantitative PCR.

Results - (i) IL-27 was markedly up-regulated in malaria patients compared with controls and HIV-infected patients without malaria, showing no relation to HIV co-infection. (ii) IL-27 was correlated with P. falciparum parasitemia and von Willebrand factor as a marker of endothelial activation, but not with disease severity. (iii) In vitro, IL-27 modulated the hemozoin-mediated cytokine response in endothelial cells and PBMC with enhancing effects on IL-6 and attenuating effects on IL-8.