Clinical characteristics, echocardiographic indices of heart failure and mortality in a general population. The Tromsø Study 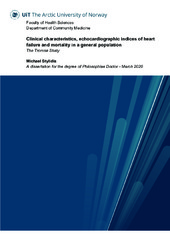 Background - Ageing of the general population, declining incidence of myocardial infarction (MI) and improvements in medical treatment have resulted in an increase in heart failure (HF) prevalence. At the same time, number of studies linked to all-cause mortality and HF, co-existing HF and chronic obstructive pulmonary disease (COPD) are scarce.

Objective - To study long-term risk of all-cause mortality using diastolic dysfunction indices in a population-based cohort. To describe peak-myocardial global longitudinal strain (GLS) in Norwegian general population sample, its relation to cardiovascular disease risk factors (CVD) and subclinical stage A HF (SAHF). To determine how abnormal lung sounds and respiratory symptoms may predict HF and COPD and estimate the overlapping grade of these diseases in a general population.

Methods - Subjects from Tromsø 4-6 surveys were followed-up over 23 years and risk of death was calculated for diastolic dysfunction indices. GLS values were assessed in healthy individuals, persons with/without SAHF. HF and COPD co-existence was estimated by

Results - Echocardiographic markers of diastolic dysfunction showed U-shaped associations with all-cause mortality outcome except of E/e´ which showed cubic association with mortality. Mean myocardial GLS (SD) in healthy individuals was -15.9 (2.7)% in men and -17.8 (3.1)% in women. Co-existent pathology was found in 9.2% among those with established COPD and HF diagnoses. Main predictors of COPD were wheezes while basal bilateral inspiratory crackles were more common for HF as were elevated proBNP.

Conclusions - Small atrial diameter is associated with increased all-cause mortality risk. Mean myocardial GLS declined with age in both sexes in general and in healthy participants. The differential diagnosis between HF and COPD in a clinical settings can be based on history, symptoms and signs. Wheezes are an independent predictor of COPD and elevated proBNP of HF.