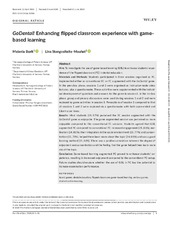 Aim - To investigate the use of game‐based learning (GBL) to enhance students’ experience of the flipped classroom (FC) in dental education.

Materials and Methods - Students participated in three sessions organised as FC, implemented either as conventional FC or FC augmented with the GoDental! game. In the pre‐class phase, sessions 1 and 2 were organised as instructor‐made video lectures, plus a questionnaire. These activities were supplemented with the individual development of questions and answers for the game in session 3. In the in‐class phase, group and plenary discussions were used during sessions 1 and 2 and were replaced by game activities in session 3. Perceptions of session 3 compared to that of sessions 1 and 2 were explored via a questionnaire with both open‐ended and Likert‐scale items.

Results - Most students (29, 97%) perceived the FC session augmented with the GoDental! game as enjoyable. The game augmented session was perceived as more enjoyable compared to the conventional FC sessions. Students agreed that GBL augmented FC compared to conventional FC increased engagement (25, 83%), motivation (24, 83%), their integration in the social environment (23, 77%) and concentration (22, 73%), helped them learn more about the topic (24, 80%) and was a good learning method (25, 83%). There was a positive correlation between the degree of enjoyment and concentration and the feeling that the game helped them learn more about the topic.

Conclusion - Game‐based learning augmented FC proved to enhance students’ experience, resulting in increased enjoyment compared to the conventional FC setup. Future studies should explore whether the use of GBL in FC has the potential to increase examination performance.