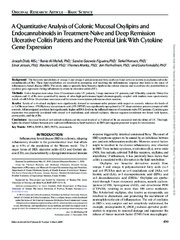 Background - The bioactive metabolites of omega 3 and omega 6 polyunsaturated fatty acids (ω-3 and ω-6) are known as oxylipins and endocannabinoids (eCBs). These lipid metabolites are involved in prompting and resolving the inflammatory response that leads to the onset of inflammatory bowel disease (IBD). This study aims to quantify these bioactive lipids in the colonic mucosa and to evaluate the potential link to cytokine gene expression during inflammatory events in ulcerative colitis (UC).

Results - Levels of ω-6-related oxylipins were significantly elevated in treatment-naïve patients with respect to controls, whereas the levels of ω-3 eCBs were lower. 15S-Hydroxy-eicosatrienoic acid (15S-HETrE) was significantly upregulated in UC deep remission patients compared with controls. All investigated cytokines had significantly higher mRNA levels in the inflamed mucosa of treatment-naïve UC patients. Cytokine gene expression was positively correlated with several ω-6 arachidonic acid–related oxylipins, whereas negative correlation was found with lipoxin, prostacyclin, and the eCBs.

Conclusions - Increased levels of ω-6-related oxylipins and decreased levels of ω-3-related eCBs are associated with the debut of UC. This highlights the altered balance between pro- and anti-inflammatory lipid mediators in IBD and suggests potential targets for intervention.