Cannabis Use during Pregnancy and Risk of Adverse Birth Outcomes: A Longitudinal Cohort Study 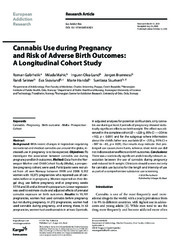 Background: With recent changes in legislation regulating recreational and medical cannabis use around the globe, increased use in pregnancy is to be expected.

Objectives: To investigate the association between cannabis use during pregnancy and birth outcomes.

Method: Data from the Norwegian Mother and Child Cohort Study (MoBa), a prospective pregnancy cohort, were used. Participants were recruited from all over Norway between 1999 and 2008: 9,312 women with 10,373 pregnancies who reported use of cannabis before or in pregnancy. Women reported on their illegal drug use before pregnancy and at pregnancy weeks 17/18 and 30 and at 6 months postpartum. Linear regression was used to estimate crude and adjusted effects of prenatal cannabis exposure on birth outcomes.

Conclusions: There was a statistically significant and clinically relevant association between the use of cannabis during pregnancy and reduced birth weight. Clinicians should screen not only for cannabis use but also for the length and intensity of use as part of a comprehensive substance use screening.