A multiple risk factor program is associated with decreased risk of cardiovascular disease in 70-year-olds: A cohort study from Sweden 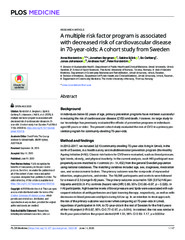 Method and findings - In 2012–2017, we included 3,613 community-dwelling 70-year-olds living in Umeå, in the north of Sweden, in a health survey and multidimensional prevention program (the Healthy Ageing Initiative [HAI]). Classic risk factors for CVD were evaluated, such as blood pressure, lipid levels, obesity, and physical inactivity. In the current analysis, each HAI participant was propensity-score-matched to 4 controls (n = 14,452) from the general Swedish population using national databases. The matching variables included age, sex, diagnoses, medication use, and socioeconomic factors. The primary outcome was the composite of myocardial infarction, angina pectoris, and stroke. The 18,065 participants and controls were followed for a mean of 2.5 (range 0–6) years. The primary outcome occurred in 128 (3.5%) HAI participants and 636 (4.4%) controls (hazard ratio [HR] 0.80, 95% CI 0.66–0.97, p = 0.026). In HAI participants, high baseline levels of blood pressure and lipids were associated with subsequent initiation of antihypertensive and lipid-lowering therapy, respectively, as well as with decreases in blood pressure and lipids during follow-up. In an intention-to-treat approach, the risk of the primary outcome was lower when comparing all 70-year-olds in Umeå, regardless of participation in HAI, to 70-year-olds in the rest of Sweden for the first 6 years of the HAI project (HR 0.87, 95% CI 0.77–0.97, p = 0.014). In contrast, the risk was similar in the 6-year period before the project started (HR 1.04, 95% CI 0.93–1.17, p = 0.03 for interaction). Limitations of the study include the observational design and that changes in blood pressure and lipid levels likely were influenced by regression towards the mean.

Conclusions - In this study, a primary prevention program was associated with a lower risk of CVD in community-dwelling 70-year-olds. With the limitation of this being an observational study, the associations may partly be explained by improved control of classic risk factors for CVD with the program.