Prevalence of symptoms, ever having received a diagnosis and treatment of depression and anxiety, and associations with health service use amongst the general population in two Russian cities 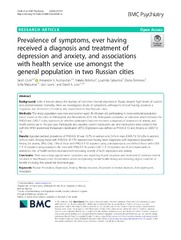 Background - Little is known about the burden of common mental disorders in Russia despite high levels of suicide and alcohol-related mortality. Here we investigated levels of symptoms, self-reports of ever having received a diagnosis and treatment of anxiety and depression in two Russian cities.

Methods - The study population was men and women aged 35–69 years old participating in cross-sectional population-based studies in the cities of Arkhangelsk and Novosibirsk (2015–18). Participants completed an interview which included the PHQ-9 and GAD-7 scales, questions on whether participants had ever received a diagnosis of depression or anxiety, and health service use in the past year. Participants also reported current medication use and medications were coded in line with the WHO anatomical therapeutic classification (ATC). Depression was defined as PHQ-9 ≥ 10 and Anxiety as GAD-7 ≥ 10.

Conclusion - There was a large gap between symptoms and reporting of past diagnosis and treatment of common mental disorders in two Russian cities. Interventions aimed at improving mental health literacy and reducing stigma could be of benefit in closing this substantial treatment gap.