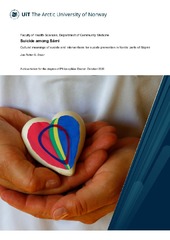 Background: In suicidological research, it is well known that suicide rates differ, sometimes to a great extent, between countries, sexes, religious and ethnic populations. It has been suggested that in-depth exploration of social, cultural, contextual and historical perspectives on suicide is needed to explain this, and increase efficacy of prevention efforts. Sámi are the Indigenous people who traditionally live in northern parts of Norway, Sweden, Finland and north-western Russia (the Kola Peninsula). Generally, Sámi seem to enjoy good health along with the majority populations, at least in jurisdictions where some data is available (no Russian data is available). However, suicide is considered a major public health issue among Sámi, as it is globally. Sámi men have died more often by suicide than the majority populations in Nordic countries, ranging from 17% excess in Sweden (1961–2000), to 150% excess in Finland (1997–2005). An increased focus on the importance of reducing suicide among Sámi has led to creation of a ‘Plan for suicide prevention among Sámi in Norway, Sweden and Finland’ in 2017. However, research on this issue is still very limited and mainly includes cohort studies on suicide mortality and cross-sectional studies on suicidal behaviour. There are no studies that have evaluated suicide prevention programs among Sámi.

Objective: The overarching aim of this thesis was to explore and elucidate how suicide is understood among Sámi and what specific actions have been taken to prevent suicide among Sámi in Nordic parts of Sápmi.

Results: Studies I and II found that specific cultural meanings were attached to suicide among Sámi, focussing on how suicide is understood to occur when Sámi are unable to maintain their Sámi identity. Contextual issues that enable such interpretations to make sense included perceptions of shortcomings in mental health services for Sámi, strong Sámi networks that increase the impacts of suicide among Sámi, and internal as well as external threats that lead to Sámi struggling. Study III identified seventeen initiatives in Sweden (9), Norway (5), Finland (1), and internationally (2). Analysis of initiatives yielded 40 problematizations regarding how initiatives aimed to prevent suicide among Sámi, addressing shortcomings on individual, relational, community/cultural, societal and health systems levels. Initiatives generally lacked evaluation components.

Conclusions: The findings in studies I and II show that there are ways of investigating culture-specific understandings of suicide among Sámi, and that suicide among Sámi is currently understood to be linked to the difficulties of maintaining Sámi identities. As regards prevention, it is suggested that the dominant rationales for suicide prevention were addressing shortcomings on individual and relational levels, and raising awareness in the general public. This threatens to obscure more critical approaches such as broadening perspectives in prevention planning, improving health systems for Sámi, and promoting cultural empowerment among Sámi. To improve evaluation and identify most promising practices, increased support regarding development of plans and implementation for evaluation components is needed.