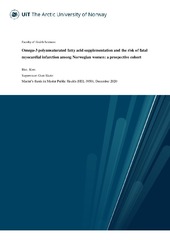 Method: The Norwegian Women and Cancer (NOWAC) study is a population-based cohort that utilizes self-reported data obtained from already existing population registries and questionnaires, in which four out of a total of eight pages contained questions regarding dietary habits. Data from 101,316 eligible Norwegian women (mean age: 52.24 years, range: 41–76 years) were analyzed. A total of 22,395 subjects were excluded according to predefined criteria, such as prevalent disease. Data on FMI were obtained from the Norwegian Cause of Death Registry. The participants were divided into three n-3 PUFA intake frequency groups: never, intermittent, and daily. The relationship between n-3 PUFA supplement intake and FMI was assessed using a Cox proportional hazards model. A stratified model was constructed according to the median intake of fatty fish (11 g/day) to assess the separate effect within groups of high and low fatty fish intake.

Conclusions: More frequent intake of n-3 PUFA supplements is not associated with a lower risk of FMI among women in the NOWAC study.