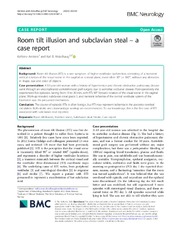 Background - Room tilt illusion (RTI) is a rare symptom of higher vestibular dysfunction, consisting of a transient vertical rotation of the visual scene in the sagittal or coronal plane, most often 90o or 180o, without any alteration in shape, size and color of objects.

Case presentation - A 63-year-old woman with a history of hypertension and chronic obstructive pulmonary disease went through an uncomplicated aortobifemoral graft surgery due to aortoiliac occlusive disease. Post-operatively she experienced five episodes, lasting from 10 to 30 min, with RTI; 90o forward rotation of the visual scene in the sagittal plane. Work-up revealed subclavian steal grade 3, and transient ischemia of the central vestibular system of the brainstem was the presumed mechanism.

Conclusion - The course of episodic RTIs is often benign, but RTI may represent ischemia in the posterior cerebral circulation. Both stroke and otoneurologic workup are recommended. To our knowledge, this is the first case of RTI associated with subclavian steal reported.