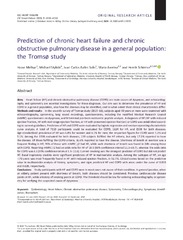 Aims - Heart failure (HF) and chronic obstructive pulmonary disease (COPD) are main causes of dyspnoea, and echocardiography and spirometry are essential investigations for these diagnoses. Our aim was to determine the prevalence of HF and COPD in a general population, also how the diseases may be identified, and to what extent their clinical characteristics differ.

Methods and results - In the seventh survey of Tromsø study (2015–16), subjects aged 40 years or more were examined with echocardiography, spirometry, lung sound recordings, questionnaires, including the modified Medical Research Council (mMRC) questionnaire on dyspnoea, and N‐terminal pro‐brain natriuretic peptide analysis. A diagnosis of HF (HF with reduced ejection fraction, HF with mid‐range ejection fraction, or HF with preserved ejection fraction) or COPD was established according to current guidelines. Predictors of HF and COPD were evaluated by logistic regression and receiver operating characteristic curve analysis. A total of 7110 participants could be evaluated for COPD, 1624 for HF, and 1538 for both diseases. Age‐standardized prevalence of HF was 6.8% for women and 6.1% for men; the respective figures for COPD were 5.2% and 5.1%. Among the 1538 evaluated for both diseases, 139 subjects fulfilled the HF criteria, but only 17.1% reported to have the disease. Of those fulfilling the COPD criteria, 31.6% reported to have the disease. Shortness of breath at exertion was a frequent finding in HF; 59% of those with mMRC ≥2 had HF, while such shortness of breath was found in 24% among those with COPD. Reporting mMRC ≥2 had an odds ratio for HF of 19.5 (95% confidence interval 11.3–33.7), whereas the odds ratio for COPD was 6.3 (95% confidence interval 3.5–11.6). Current smoking was the strongest predictor of COPD but did not predict HF. Basal inspiratory crackles were significant predictors of HF in multivariable analysis. Among the subtypes of HF, an age <70 years was most frequently found in HF with reduced ejection fraction, in 51.7%. Clinical scores based on the predictive value in multivariable analysis of history, symptoms, and signs predicted HF and COPD with areas under the curve of 0.833 and 0.829, respectively.

Conclusions - Study participants with HF and COPD were in most cases not aware of their condition. In general practice, when an elderly patient present with shortness of breath, both diseases should be considered. Previous cardiovascular disease points at HF, while a history of smoking points at COPD. The threshold should be low for ordering echocardiography or spirometry for verifying the suspected cause of dyspnoea.