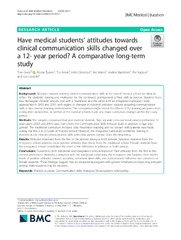 Background - Attitudes towards learning clinical communication skills at the end of medical school are likely to reflect the students’ training and motivation for the continued development of their skills as doctors. Students from two Norwegian medical schools, one with a traditional, and the other with an integrated curriculum, were approached in 2003 and 2015; with regard to changes in students’ attitudes towards acquiring communication skills in two diverse learning environments. This comparison might reveal the effects of the training programs from a long-term perspective, as neither of the medical schools made any major curriculum changes within the study period.

Methods - The samples comprised final-year medical students. Two separate cross-sectional surveys performed 12 years apart (2003 and 2015) used items from the Communication Skills Attitude Scale in addition to age and gender. The traditional curriculum included only theoretical teaching and no contact with patients was made during the first 2 to 2.5 years of medical school. However, the integrated curriculum combined training in theoretical and clinical communication skills with early patient contact from the beginning.

Conclusions - Students in both traditional and integrated curricula improved their attitudes from the first to the second assessment. However, compared with the traditional curriculum, the integrated one fostered even higher levels of positive attitudes towards acquiring communication skills, and a pronounced influence was observed on female students. These findings suggest that an educational program with greater emphasis on improving attitudes among male students may be required.