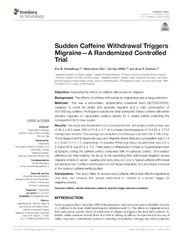 Objective: Assessing the effects of caffeine withdrawal on migraine.

Background: The effects of caffeine withdrawal on migraineurs are at large unknown.

Methods: This was a randomized, double-blind, crossover study (NCT03022838), designed to enroll 80 adults with episodic migraine and a daily consumption of 300–800 mg caffeine. Participants substituted their estimated dietary caffeine with either placebo capsules or capsulated caffeine tablets for 5 weeks before switching the comparators for 5 more weeks.

Results: The study was terminated due to low recruitment. Ten subjects with a mean age of 46.3 ± 9.9 years, BMI of 24.9 ± 3.7, and a mean blood pressure of 134/83 ± 17/12 mmHg were enrolled. The average consumption of caffeine per day was 539 ± 196.3 mg. The average monthly headache days and migraine attack frequency at baseline was 11.5 ± 4.9 and 5.2 ± 1.2, respectively. At baseline Pittsburgh Sleep Quality Index was 5.8 ± 2.5 and HIT-6 was 62.8 ± 3.9. There were no differences in these or in parameters from actigraphy during the caffeine period compared with the placebo period. One subject withdrew just after entering the study. In the remaining nine, withdrawal triggered severe migraine attacks in seven, causing one more drop-out, and a typical caffeine withdrawal syndrome in two. Caffeine continuation did not trigger migraines, but one attack occurred in the wake of caffeine reintroduction.

Conclusions: The study failed to answer how caffeine withdrawal affects migraineurs over time, but showed that abrupt withdrawal of caffeine is a potent trigger for migraine attacks.