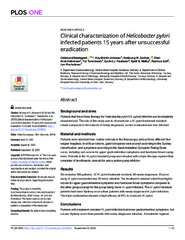 Background and aims - Patients that have failed therapy for Helicobacter pylori (H. pylori) infection are incompletely characterized. The aim of this study was to characterize a H. pylori treatment resistant cohort compared to the cohorts of newly diagnosed, earlier eradicated and non-infected.

Material and methods - Patients were selected from routine referrals to the Endoscopy units at three different Norwegian hospitals. In all four cohorts, gastric biopsies were scored according to the Sydney classification, and symptoms according to the Gastrointestinal Symptom Rating Scale score, including sub-scores for upper gastrointestinal symptoms and functional bowel symptoms. Patients in the H. pylori resistant group were treated with a triple therapy regimen that consisted of levofloxacin, amoxicillin and a proton pump inhibitor.

Conclusions - Patients with treatment-resistant H. pylori infection had more gastrointestinal symptoms, but a lower Sydney score than patients with newly diagnosed infection. A treatment regimen including levofloxacin showed a high efficacy in eradicating H. pylori in patients that previously had failed eradication treatment.