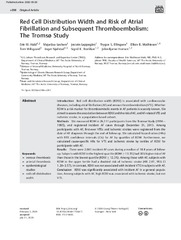 Introduction- Red cell distribution width (RDW) is associated with cardiovascular diseases, including atrial fibrillation (AF) and venous thromboembolism (VTE). Whether RDW is a risk marker for thromboembolic events in AF patients is scarcely known. We aimed to assess the association between RDW and the risk of AF, and AF-related VTE and ischemic stroke, in a population-based cohort.

Methods- We measured RDW in 26,111 participants from the Tromsø Study (1994–1995), and registered incident AF cases through December 31, 2013. Among participants with AF, first-ever VTEs and ischemic strokes were registered from the date of AF diagnosis through the end of follow-up. We calculated hazard ratios (HRs) with 95% confidence intervals (CIs) for AF by quartiles of RDW. Furthermore, we calculated cause-specific HRs for VTE and ischemic stroke by tertiles of RDW for participants with AF.