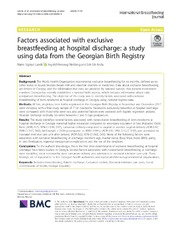 Methods - All live, singleton, term births registered in the Georgian Birth Registry in November and December 2017 were included, with a final study sample of 7134 newborns. Newborns exclusively breastfed at hospital discharge were compared with those who were not, and potential factors were assessed with logistic regression analysis. Hospital discharge normally occurred between 2 and 5 days postpartum.

Conclusions - To the authors’ knowledge, this is the first time determinants of exclusive breastfeeding at hospital discharge have been studied in Georgia. Several factors associated with nonexclusive breastfeeding at discharge were identified, most noteworthy were caesarean delivery and admission to neonatal intensive care unit. These findings are of importance to the Georgian health authorities and maternal/child non-governmental organizations.