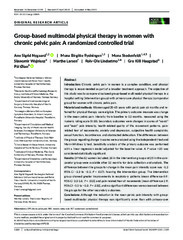 Material and methods - Women aged 20‐65 years with pelvic pain ≥6 months and referred for physical therapy were eligible. The primary outcome measure was change in the mean pelvic pain intensity from baseline to 12 months, measured using the numeric rating scale (0‐10). Secondary outcomes were changes in scores of “worst” and “least” pain intensity, health‐related quality of life, movement patterns, pain‐related fear of movements, anxiety and depression, subjective health complaints, sexual function, incontinence, and obstructed defecation. The differences between the groups regarding change in scores were analyzed using the independent t test and Mann‐Whitney U test. Sensitivity analysis of the primary outcome was performed with a linear regression model adjusted for the baseline value. A P value <.05 was considered statistically significant.

Conclusions - Although the reduction in the mean pelvic pain intensity with group‐based multimodal physical therapy was significantly more than with primary‐care physical therapy, the difference in the change between the groups was less than expected and the clinical relevance is uncertain.