The optimal platelet concentration in platelet-rich plasma for proliferation of human cells in vitro:diversity, biases, and possible basic experimental principles for further research in the field: A review 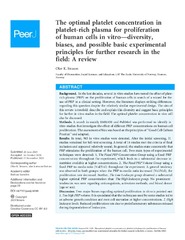 Background - In the last decades, several in vitro studies have tested the effect of plate-rich plasma (PRP) on the proliferation of human cells in search of a wizard for the use of PRP in a clinical setting. However, the literature displays striking differences regarding this question despite the relatively similar experimental design. The aim of this review is twofold: describe and explain this diversity and suggest basic principles for further in vitro studies in the field. The optimal platelet concentration in vivo will also be discussed.

Methods - A search in mainly EMBASE and PubMed was performed to identify in vitro studies that investigate the effect of different PRP concentrations on human cell proliferation. The assessment of bias was based on the principles of “Good Cell Culture Practice” and adapted.

Results - In total, 965 in vitro studies were detected. After the initial screening, 31 studies remained for full-text screening. A total of 16 studies met the criteria of final inclusion and appeared relatively sound. In general, the studies state consistently that PRP stimulates the proliferation of the human cell. Two main types of experimental techniques were detected: 1. The Fixed PRP Concentration Group using a fixed PRP concentration throughout the experiment, which leads to a substantial decrease in nutrition available at higher concentrations. 2. The Fixed PRP Volume Group using a fixed PRP-to-media ratio (Vol/Vol) throughout the experiment. A general tendency was observed in both groups: when the PRP to media ratio increased (Vol/Vol), the proliferation rate decreased. Further, The Low Leukocyte group observed a substantial higher optimal PRP concentration than The High leukocyte group. No prominent tendencies was seen regarding anticoagulants, activation methods, and blood donor (age or sex).

Discussion - Two major biases regarding optimal proliferation in vitro is pointed out: 1. Too high PRP volume. It is speculated that the techniques used by some studies led to an adverse growth condition and even cell starvation at higher concentrations. 2. High leukocyte levels. Reduced proliferation rate due to proinflammatory substances released during degranulation of leukocytes.

Conclusions - The two main biases may explain the bell-shaped effect of PRP and the detrimental effects at higher platelet concentrations observed in several studies. These biases may also explain the low optimal PRP concentration observed in some studies. Even if one universal optimal PRP concentration does not exist, the review indicates that PRP concentrations in the upper parts of the scale is optimal or at least beneficial. Finally, following basic experimental principles are suggested. 1: The PRP/media ratio (Vol/Vol) should be kept as constant. 2: The PRP/media ratio should provide a sufficient nutrition supply, that is, PRP ≤ 10% (Vol/Vol). 3: The cell density per well (cells/mL) should be defined. 4: Leukocyte level should be kept low, preferable depleted (< 0.1 PLT/µL).

Straum OK. The optimal platelet concentration in platelet-rich plasma for proliferation of human cells in vitro:diversity, biases, and possible basic experimental principles for further research in the field: A review. PeerJ. 2020;8(e10303):1-28