Why does Russia have such high cardiovascular mortality rates? Comparisons of blood-based biomarkers with Norway implicate non-ischaemic cardiac damage 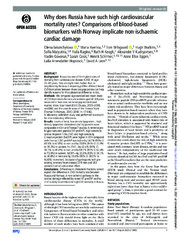 Background - Russia has one of the highest rates of mortality from cardiovascular disease (CVD). At age 35–69 years, they are eight times higher than in neighbouring Norway. Comparing profiles of blood-based CVD biomarkers between these two populations can help identify reasons for this substantial difference in risk.

Conclusions - Differences in cholesterol fractions cannot explain the difference in CVD mortality rate between Russia and Norway. A non-ischemic pathway to the cardiac damage reflected by raised NT-proBNP and hs-cTnT is likely to contribute to high CVD mortality in Russia.