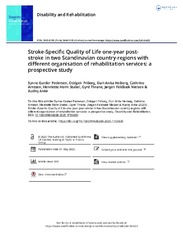 Purpose: To compare stroke-specific health related quality of life in two country-regions with organisational differences in subacute rehabilitation services, and to reveal whether organisational factors or individual factors impact outcome.

Materials and methods: A prospective multicentre study with one-year follow-up of 369 first-ever stroke survivors with ischaemic or haemorrhagic stroke, recruited from stroke units in North Norway (n = 208) and Central Denmark (n = 161). The 12-domain Stroke-Specific Quality of Life scale was the primary outcome-measure.

Conclusions: Successful improvements in one-year functioning in both country-regions may result from optimising long-term rehabilitation services to address cognitive, emotional, and social functioning. Stroke-Specific Quality of Life one-year post-stroke could be explained by individual factors, such as pre-stroke dependency and mental health, rather than differences in the organisation of subacute rehabilitation services.