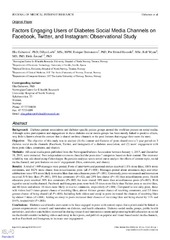 Background: Diabetes patient associations and diabetes-specific patient groups around the world are present on social media. Although active participation and engagement in these diabetes social media groups has been mostly linked to positive effects, very little is known about the content that is shared on these channels or the post features that engage their users the most.

Objective: The objective of this study was to analyze (1) the content and features of posts shared over a 3-year period on 3 diabetes social media channels (Facebook, Twitter, and Instagram) of a diabetes association, and (2) users’ engagement with these posts (likes, comments, and shares).

Methods: All social media posts published from the Norwegian Diabetes Association between January 1, 2017, and December 31, 2019, were extracted. Two independent reviewers classified the posts into 7 categories based on their content. The interrater reliability was calculated using Cohen kappa. Regression analyses were carried out to analyze the effects of content topic, social media channel, and post features on users’ engagement (likes, comments, and shares).

Results: A total of 1449 messages were posted. Posts of interviews and personal stories received 111% more likes, 106% more comments, and 112% more shares than miscellaneous posts (all P<.001). Messages posted about awareness days and other celebrations were 41% more likely to receive likes than miscellaneous posts (P<.001). Conversely, posts on research and innovation received 31% less likes (P<.001), 35% less comments (P=.02), and 25% less shares (P=.03) than miscellaneous posts. Health education posts received 38% less comments (P=.003) but were shared 39% more than miscellaneous posts (P=.007). With regard to social media channel, Facebook and Instagram posts were both 35 times more likely than Twitter posts to receive likes, and 60 times and almost 10 times more likely to receive comments, respectively (P<.001). Compared to text-only posts, those with videos had 3 times greater chance of receiving likes, almost 4 times greater chance of receiving comments, and 2.5 times greater chance of being shared (all P<.001). Including both videos and emoji in posts increased the chances of receiving likes by almost 7 times (P<.001). Adding an emoji to posts increased their chances of receiving likes and being shared by 71% and 144%, respectively (P<.001).

Conclusions: Diabetes social media users seem to be least engaged in posts with content topics that a priori could be linked to greater empowerment: research and innovation on diabetes, and health education. Diabetes social media groups, public health authorities, and other stakeholders interested in sharing research and innovation content and promoting health education on social media should consider including videos and emoji in their posts, and publish on popular and visual-based social media channels, such as Facebook and Instagram, to increase user engagement.