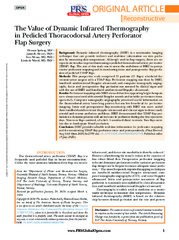 Background: Dynamic infrared thermography (DIRT) is a noninvasive imaging technique that can provide indirect and real-time information on skin perfusion by measuring skin temperature. Although used in flap surgery, there are no reports on its value in procedures using a pedicled thoracodorsal artery perforator (TDAP) flap. The aim of this study was to assess the usefulness of DIRT in preoperative perforator mapping and in monitoring intra- and postoperative flap perfusion of pedicled TDAP flaps.

Methods: This prospective study comprised 21 patients (21 flaps) scheduled for reconstructive surgery with a TDAP flap. Perforator mapping was done by DIRT, handheld unidirectional Doppler ultrasound, and computer tomography angiography. Intra- and postoperative flap perfusion was assessed by clinical signs and with the use of DIRT and handheld unidirectional Doppler ultrasound.