Stress and perceived health among primary care visitors in two corners of Europe: Scandinavia and Greece 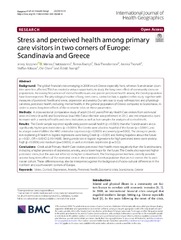 Background - The global financial crisis emerging in 2008 struck Greece especially hard, whereas Scandinavian countries were less affected. This has created a unique opportunity to study the long-term effect of community stress on populations. Increasing frequencies of mental health issues and poorer perceived health among the Greek population have been reported. The physiological marker of long-term stress, cortisol in hair, is applied in this study together with measures of perceived health and stress, depression and anxiety. Our aim was to study self-reported and physiological stress, perceived health, including mental health, in the general population of Greece compared to Scandinavia, in order to assess long-term effects of the economic crisis on these parameters.

Methods - A cross-sectional comparative study of adult (18–65 years) Primary Health Care visitors from semi-rural areas in Greece (n = 84) and Scandinavia (n = 140). Data collection was performed in 2012, and encompassed a questionnaire with a variety of health and stress indicators as well as hair samples for analyzes of cortisol levels.

Conclusions - Greek adult Primary Health Care visitors perceived their health more negatively than the Scandinavians, including a higher presence of depression, anxiety, and a lower hope for the future. The Greeks also reported higher perceived stress, but this was not reflected in higher cortisol levels. The findings presented here, identify possible adverse long-term effects of the economic crisis in the examined Greek population that are not seen in the Scandinavian cohort. These differences may also be interpreted against the background of socio-cultural differences in the northern and south-eastern corners of Europe.