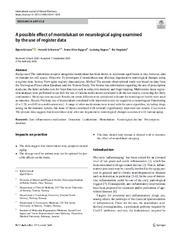 Method - The present observational study was based on data from the Norwegian Prescription Database and the Tromsø Study. The former has information regarding the use of prescription medicine; the latter includes tests for brain function such as subjective memory and finger-tapping. Multivariate linear regression analyses were performed to see how the use of various medications correlated with the test results, correcting for likely confounders.

Main outcome measure - Results on seven different tests considered relevant for neurological health were used as outcome. Results Previous use of montelukast correlated with improved scores on cognitive or neurological functioning (F = 2.20, p = 0.03 in a multivariate test). A range of other medications were tested with the same algorithm, including drugs acting on the immune system, but none of them correlated with (overall) significantly improved test results.

Grinde B, Schirmer H, Eggen AE, Aigner L, Engdahl B. A possible effect of montelukast on neurological aging examined by the use of register data. International Journal of Clinical Pharmacy. 2020