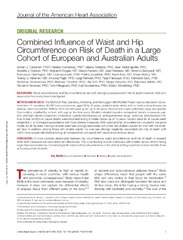 Background - Waist circumference and hip circumference are both strongly associated with risk of death; however, their joint association has rarely been investigated.

Methods and Results - The MONICA Risk, Genetics, Archiving, and Monograph (MORGAM) Project was conducted in 30 cohorts from 11 countries; 90 487 men and women, aged 30 to 74 years, predominantly white, with no history of cardiovascular disease, were recruited in 1986 to 2010 and followed up for up to 24 years. Hazard ratios were estimated using sex‐specific Cox models, stratified by cohort, with age as the time scale. Models included baseline categorical obesity measures, age, total and high‐density lipoprotein cholesterol, systolic blood pressure, antihypertensive drugs, smoking, and diabetes mellitus. A total of 9105 all‐cause deaths were recorded during a median follow‐up of 10 years. Hazard ratios for all‐cause death presented J‐ or U‐shaped associations with most obesity measures. With waist and hip circumference included in the same model, for all hip sizes, having a smaller waist was strongly associated with lower risk of death, except for men with the smallest hips. In addition, among those with smaller waists, hip size was strongly negatively associated with risk of death, with ≈20% more people identified as being at increased risk compared with waist circumference alone.

Conclusions - A more complex relationship between hip circumference, waist circumference, and risk of death is revealed when both measures are considered simultaneously. This is particularly true for individuals with smaller waists, where having larger hips was protective. Considering both waist and hip circumference in the clinical setting could help to best identify those at increased risk of death.