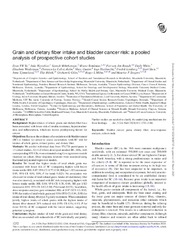 Background - Higher intakes of whole grains and dietary fiber have been associated with lower risk of insulin resistance, hyperinsulinemia, and inflammation, which are known predisposing factors for cancer.

Objectives - Because the evidence of association with bladder cancer (BC) is limited, we aimed to assess associations with BC risk for intakes of whole grains, refined grains, and dietary fiber.

Conclusions - Higher intakes of total whole grain and total dietary fiber are associated with reduced risk of BC individually and jointly. Further studies are needed to clarify the underlying mechanisms for these findings.