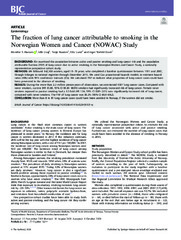 Background - We examined the association between active and passive smoking and lung cancer risk and the population attributable fraction (PAF) of lung cancer due to active smoking, in the Norwegian Women and Cancer Study, a nationally representative prospective cohort study.

Methods - We followed 142,508 women, aged 31–70 years, who completed a baseline questionnaire between 1991 and 2007, through linkages to national registries through December 2015. We used Cox proportional hazards models, to estimate hazard ratios (HRs) with 95% confidence intervals (CIs). We calculated PAF to indicate what proportion of lung cancer cases could have been prevented in the absence of smoking.

Conclusion - More than 8 in 10 lung cancer cases could have been avoided in Norway, if the women did not smoke.