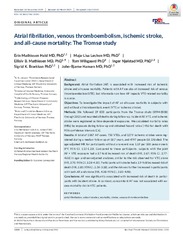 Background Atrial fibrillation (AF) is associated with increased risk of ischemic stroke and all‐cause mortality. Patients with AF are also at increased risk of venous thromboembolism (VTE), but information on how AF impacts VTE‐related mortality is scarce. Objectives - To investigate the impact of AF on all‐cause mortality in subjects with and without a thromboembolic event (VTE or ischemic stroke).

Methods - We followed 29 833 participants from the Tromsø study (1994‐2008) through 2013 and recorded all deaths during follow‐up. Incident AF, VTE, and ischemic stroke were registered as time‐dependent exposures. We calculated mortality rates (MRs) by exposure during follow‐up and obtained hazard ratios (HRs) for death with 95% confidence intervals (CIs).

Conclusions - AF was significantly associated with increased risk of death in participants with incident stroke. In contrast, concomitant AF was not associated with excess mortality risk in VTE patients.