Volume blood flow-based indices of fetal brain sparing in the second half of pregnancy: A longitudinal study 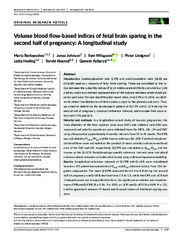 Introduction - Cerebroplacental ratio (CPR) and umbilicocerebral ratio (UCR) are clinically used as a measure of fetal brain sparing. These are calculated as the ratios between the pulsatility indices (PIs) of middle cerebral (MCA) and umbilical (UA) arteries, and are an indirect representation of the balance between cerebral and placental perfusion. Volume blood flow (Q)‐based ratios, ie Q‐CPR or Q‐UCR, would directly reflect the distribution of fetal cardiac output to the placenta and brain. Thus, we aimed to determine the development pattern of Q‐CPR and Q‐UCR during the second half of pregnancy, construct reference intervals, and evaluate their association with CPR and UCR.

Material and methods - In a longitudinal cohort study of low‐risk pregnancies, the inner diameter of the fetal superior vena cava (SVC) and umbilical vein (UV) was measured and velocity waveforms were obtained from the MCA, UA, UV and SVC using ultrasound at approximately 4‐weekly intervals from 20 to 41 weeks. The CPR was calculated as PIMCA/PIUA and the inverse ratio was the UCR. Cerebral and placental blood flows were estimated as the product of mean velocity and cross‐sectional area of the SVC and UV, respectively. Q‐CPR was calculated as QSVC/QUV and the inverse as the Q‐UCR. Gestational age‐specific reference intervals were calculated and associations between variables were tested using multilevel regression modeling.

Results - Longitudinal reference intervals of Q‐CPR and Q‐UCR were established based on 471 paired measurements of QSVC and QUV obtained serially from 134 singleton pregnancies. The mean Q‐CPR increased from 0.4 to 0.8 during the second half of pregnancy and Q‐UCR declined from 2.5 to 1.3, while the CPR and UCR had U‐shaped curves but in opposite directions. No significant correlation was found between CPR and Q‐CPR (R = 0.10; P = .051), or UCR and Q‐UCR (R = 0.09; P = .11), and the agreement between PI‐based and Q‐based indices of fetal brain sparing was poor.

Conclusions - Indices of fetal brain sparing based on placental and cerebral volume blood flow differ from those calculated from UA and MCA PIs. They correlated poorly with conventional CPR and UCR, indicating that they may provide additional/different physiological information. Reference values of Q‐CPR and Q‐UCR established here can be useful to investigate their clinical value further.