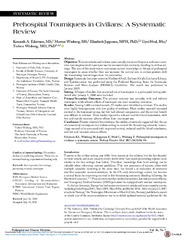 Objectives: Terrorist attacks and civilian mass-casualty events are frequent, and some countries have implemented tourniquet use for uncontrollable extremity bleeding in civilian settings. The aim of this study was to summarize current knowledge on the use of prehospital tourniquets to assess whether their use increases the survival rate in civilian patients with life-threatening hemorrhages from the extremities.

Setting: All types of studies that examined use of tourniquets in a prehospital setting published after January 1, 2000 were included.

Primary/Secondary Outcomes: The primary outcome was mortality with and without tourniquet, while adverse effects of tourniquet use were secondary outcomes.

Results: Among 3,460 screened records, 55 studies were identified as relevant. The studies were highly heterogeneous with low quality of evidence. Most studies reported increased survival in the tourniquet group, but few had relevant comparators, and the survival benefit was difficult to estimate. Most studies reported a reduced need for blood transfusion, with few and mainly transient adverse effects from tourniquet use.

Conclusion: Despite relatively low evidence, the studies consistently suggested that the use of commercial tourniquets in a civilian setting to control life-threatening extremity hemorrhage seemed to be associated with improved survival, reduced need for blood transfusion, and few and transient adverse effects.