Treatment needs and acknowledgement of illness : importance for satisfaction with psychiatric inpatient treatment 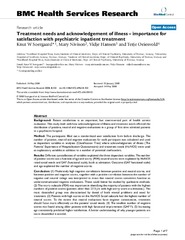 Background: Patient satisfaction is an important, but controversial part of health service evaluation. This study dealt with how acknowledgement of illness and treatment needs effected the distribution of positive, neutral and negative evaluations in a group of first time admitted patients to a psychiatric hospital.
Method: The participants filled out a standardized user satisfaction form before discharge. The number of positive, neutral and negative evaluations for each participant was calculated and used as dependent variables in analyses (Classification Tree) where acknowledgement of illness (The Patients' Experience of Hospitalisation Questionnaire) and treatment needs (HoNOS) were used as explanatory variables in addition to a number of potential confounders.
Results: Different constellations of variables explained the three dependent variables. The number of positive scores was a function of age and worry (PEH); neutral scores were explained by HoNOS rated social needs and GAF (functional scale), both at admission. Outcome (GAF functional scale) and age explained the number of negative scores.
Conclusion: (1) Moderately high negative correlations between positive and neutral scores, and between positive and negative scores, together with a positive correlation between the number of negative and neutral ratings was interpreted to mean that neutral scores sometimes function as undercommunicated negative evaluations. These could better be studied by qualitative methods. (2) The worry subscale (PEH) was important in identifying the majority of patients with the highest numbers of positive scores (patients older than 27.5 yrs with high worry score at admission.). The most dissatisfied group was characterised by denial of both mental problems and need for treatment. (3) Patients with high scores on the HoNOS Social subscale had the highest number of neutral scores. To the extent that neutral evaluations have negative connotations, treatment should focus more effectively on the patients' social needs. (4) The smallest number of negative scores was found among older patients with high functional improvement (GAF F). (5) Increasing age consistently predicted higher satisfaction. A better understanding of why younger patients are more dissatisfied is needed.