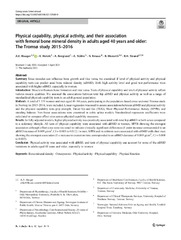 Results: In fully adjusted models, higher physical activity was positively associated with total hip aBMD in both sexes compared to a sedentary lifestyle. All tests of physical capability were associated with aBMD in women, SPPB showing the strongest association although effect sizes were too small to indicate clinically significant differences (1 point increase corresponded to an aBMD increase of 0.009 g/cm2, CI = 0.005 to 0.012). In men, SPPB and its subtests were associated with aBMD with chair rises showing the strongest association (1 s increase in execution time corresponded to an aBMD decrease of 0.005 g/cm2, CI = 0.008 to 0.002).

Conclusion: Physical activity was associated with aBMD, and tests of physical capability can account for some of the aBMD variations in adults aged 40 years and older, especially in women.