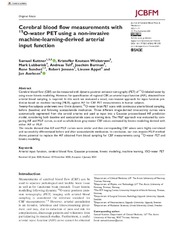 Cerebral blood flow (CBF) can be measured with dynamic positron emission tomography (PET) of 15O-labeled water by using tracer kinetic modelling. However, for quantification of regional CBF, an arterial input function (AIF), obtained from arterial blood sampling, is required. In this work we evaluated a novel, non-invasive approach for input function prediction based on machine learning (MLIF), against AIF for CBF PET measurements in human subjects.

The results showed that AIF and MLIF curves were similar and that corresponding CBF values were highly correlated and successfully differentiated before and after acetazolamide medication. In conclusion, our non-invasive MLIF method shows potential to replace the AIF obtained from blood sampling for CBF measurements using 15O-water PET and kinetic modelling.