Is the ongoing obesity epidemic partly explained by concurrent decline in cigarette smoking? Insights from a longitudinal population study. The Tromsø Study 1994–2016 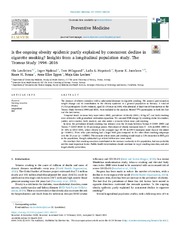 The increase of obesity coincides with a substantial decrease in cigarette smoking. We assessed post-cessation weight change and its contribution to the obesity epidemic in a general population in Norway. A total of 14,453 participants (52.6% women), aged 25–54 years in 1994, who attended at least two of four surveys in the Tromsø Study between 1994 and 2016, were included in the analysis. Hereof 77% participated in both the first and the last survey.

We conclude that smoking cessation contributed to the increase in obesity in the population, but was probably not the most important factor. Public health interventions should continue to target smoking cessation, and also target obesity prevention.