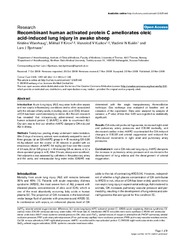 Introduction: Acute lung injury (ALI) may arise both after sepsis and non-septic inflammatory conditions and is often associated with the release of fatty acids, including oleic acid (OA). Infusion of OA has been used extensively to mimic ALI. Recent research has revealed that intravenously administered recombinant human activated protein C (rhAPC) is able to counteract ALI. Our aim was to find out whether rhAPC dampens OA-induced ALI in sheep.
Methods: Twenty-two yearling sheep underwent instrumentation. After 2 days of recovery, animals were randomly assigned to one of three groups: (a) an OA+rhAPC group (n = 8) receiving OA 0.06 mL/kg infused over the course of 30 minutes in parallel with an intravenous infusion of rhAPC 24 mg/kg per hour over the course of 2 hours, (b) an OA group (n = 8) receiving OA as above, or (c) a sham-operated group (n = 6). After 2 hours, sheep were sacrificed. Hemodynamics was assessed by catheters in the pulmonary artery and the aorta, and extravascular lung water index (EVLWI) was determined with the single transpulmonary thermodilution technique. Gas exchange was evaluated at baseline and at cessation of the experiment. Data were analyzed by analysis of variance; a P value of less than 0.05 was regarded as statistically significant.
Results: OA induced profound hypoxemia, increased right atrial and pulmonary artery pressures and EVLWI markedly, and decreased cardiac index. rhAPC counteracted the OA-induced changes in EVLWI and arterial oxygenation and reduced the OA-induced increments in right atrial and pulmonary artery pressures.
Conclusions: In ovine OA-induced lung injury, rhAPC dampens the increase in pulmonary artery pressure and counteracts the development of lung edema and the derangement of arterial oxygenation.